I am honoured to represent the Chief of Army here today at this General Sir John Monash Commemorative Service. A role model whose attributes and style are as relevant today as they were during his distinguished service during World War One.

As I prepared for today I asked the question: what is the importance of the day to me and his value to us? 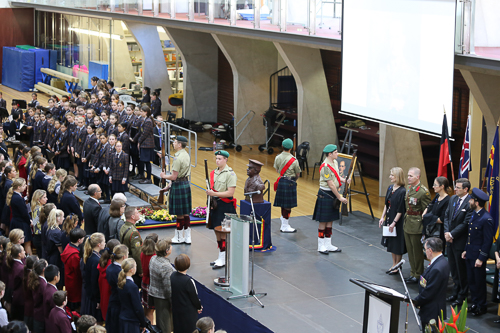 It is a beautiful day and we are surrounded by an amazing educational facility.  We live in a country where we are safe, where we strive to include the outsider, we assist and care for the vulnerable, and where we endeavor to use our education to better ourselves and the lives of those around us.  Remembering a prominent and hardworking citizen who helped make Australia the ‘lucky’ country is important in our quest to ensure his legacy is honoured.

General Sir John Monash was born in Melbourne in 1865 and educated at Scotch College and then the University of Melbourne graduating with three Bachelor Degrees in engineering, law and arts.  He was Jewish in heritage and many doors in society of those times were closed to him because of this. Sir John was a well educated (and broadly educated person).  He valued education and he applied himself to it so that he could better himself.

He embarked on a career in engineering with success; he contributed to many community activities and joined the Australian Army (Militia) in a part-time capacity.  He was marked for success in all of these varied fields.

With the outbreak of the Great War, Monash was promoted to the rank of Brigadier General and appointed as Commander of the 4th Infantry Brigade.   His Brigade trained in Egypt and landed at Gallipoli on the morning of the 26th April 1915.   For the landing his Brigade was given a sector including responsibility for Pope’s Hill and Quinn’s Post.  These names we know today for all of the wrong reasons – the number of young Australian lives that were lost in those locations.

After withdrawal from Gallipoli, Monash was promoted to Major General in July 1916, and placed in command of the 3rd Australian Division.  He had reflected on his experiences at Gallipoli and set about applying new ideas to warfare that would protect the lives of his men.  The Division was involved in months of serious fighting and trench warfare in France from November 1916 until they progressed to full scale operations from June 1917 onward.  After his brilliant blocking of the massive German offensive from 21 March 1918, Monash was promoted in May to Lieutenant General and appointed as Commander of the Australian Army Corps. It was during this period that he planned and directed a series of determined and effective actions including the masterful and meticulously planned ‘Battle of Amiens’ in which two German armies were defeated.

British leaders of the time, such as Prime Minister Lloyd George, Winston Churchill, Sir Anthony Eden (a later British PM), and (later) Field Marshal Montgomery, maintained that Monash was the outstanding General on the Western Front because of his ‘creative originality.’

His successes in the war could be attributed to his pre war study of all the major ‘new’ weaponry that emerged at that time, including the tank and the aeroplane, artillery, machine guns, and decoy targets. He was a great believer in employing modern communications including the radio and gathering information through the use of aerial reconnaissance.

This exceptional knowledge and thirst for an understanding of new technology allowed him, in the pressure of the war years, to absorb all the important developments and to apply them in combination on the battlefield.

Monash approached battles as he approached engineering projects in his civilian employment---by coordinating all the key elements in great detail. He also understood the broader ramifications of running a huge organisation; he was a corporate thinker. He encouraged a working environment in which innovation was allowed. Monash promoted professional debate.

Upon returning from the War, Monash’s energy enabled him to continue with his prominent community involvement and contribution to a number of organizations.    His key appointments included: Royal Commissioner to investigate the police strike of 1923; membership of the Commonwealth Defence Council and the Walter and Eliza Hall Institute; service as a Rhodes Scholarship selector, as president of the Australian Association for the Advancement of Science and the honorary Vice-Chancellor of the University of Melbourne.

The modern Australian Army continues to be guided by his approach. We believe that including all into the Army that we will have the very best talent (people like Monash) to protect our nation in future.  Army uses the Defence, Science and Technology Organizations’ work in close co-operation with troops deployed on operations, to develop and produce new solutions to protect our nation.

We continue to be inspired by the idea that learning and the application of knowledge will help keep our soldier’s safe.  Many Australian lives were saved because of Sir John’s care for his soldiers in the most horrific of wars.

I, like many people in Australia, have family who served under Monash in World War 1.  This will almost certainly include some of you in this room.  I am moved to reflect that if he was a different kind of person maybe they would not have returned safely back to these shores.

Monash was not only a man for his time, but also a man for the future; Monash University is a great example of his legacy to us.  A man judged by history as an inspirational leader. His philosophies and ideas are clearly evident today in the embodied character, ethos and values of our modern Army and Nation.  A great citizen and a great soldier.

Speech by Brigadier Phillip Moses based upon Brief by Roland J Perry, author of “Monash – The Outsider who won a War”, for St Catherine’s, Waverley, 2017.