Members of the Pipeclay Club met for ANZAC Day at the RACV Club. Historian and author Dr Ross McMullin spoke on the role and outstanding contribution of Australian soldiers and their leadership on the Western Front in 1917 and 1918.

Ross gave a detailed account of the Second Battle of Villers-Bretonneux, which took place from 24 to 25 April 1918, during the German Spring Offensive, against the Allied lines to the east of Amiens. 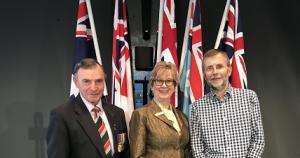