Like Michael, I am a child of World War II. My father didn’t come home until I was two years old and then he was demobbed (demobilised). As a result, I’ve always been interested in the effect of war on society, and when
I went to university I majored in history and politics.

My second husband, (Major) Bill Billett, used to take me to lunch at The Naval and Military Club in Little Collins St and that’s how I became an associate member.

I’ve known Michael from the time I started working on my book, Memories of War. I interviewed 50 members of The Naval and Military Club about their World War II experiences and that book took me about six years to write. Michael was one of the committee members who encouraged me and he organised my contract.

Many of the people I interviewed had quite severe post traumatic stress, which at that stage not many people knew about. As a woman I think you are much more empathetic. Michael says I don’t stop talking, but on the other hand I do an awful lot of listening.

In retrospect there are many things I’ve done partly because I am a woman. I’m empathetic and I’ve seen that it’s worth pushing a bit. I was successful in getting a plaque at the the Australian War Memorial for the sailors who were part of the Yachtsmen Scheme. I researched this courageous group of men for my master’s degree and now I’m writing a book about them.

Michael and I are on the committee of the Pipeclay Club, which is an interest group within the RACV Club.

Our functions are held at RACV City Club, with the Anzac Day lunch being the biggest event.

For Memories of War I interviewed a number of fascinating women. I think it’s interesting to look back at the things people fought for, which are all important for young women today. Times have changed, but it can still difficult be at times

I’ve known Jan since 1995, when she started working on Memories of War, which was published by The Naval and
Military Club. Since then we’ve stayed in touch and we are both on the committee of the Pipeclay Club and the
committee of Military History & Heritage Victoria.

I have a master’s degree in military history and a long association with the Army Reserve. The Naval and Military Club went into liquidation in 2008 and the RACV Club was kind enough to absorb all the members. The Pipeclay Club was established on Remembrance Day in 2010 to maintain those military connections.

We’re a virtual club but we haven’t conducted any Zoom meetings during lockdown. Most of our members place greater value on the opportunities to get together in person. Everyone’s active service was a long time ago, but people have had long and fruitful lives, so there’s plenty of other things to talk about.

Jan brings her enormous enthusiasm for military matters to the Pipeclay Club and she keeps in touch with lots of people. Our biggest event is the Anzac Day lunch, which had to be cancelled this year, but we usually have a speaker. Last time it was Michael Bennett, the great grandson of General Sir John Monash.

I think drawing comparisons between wartime and the COVID-19 pandemic is a stretch, but the lockdown may have given young people an idea of what it’s like to have to sacrifice your personal needs for the general good.

The RACV Club caters for all sorts of interests, whether it’s dining, motoring or going to the gym. It is probably the best fitted-out club of any in Melbourne. Hopefully, after the lockdown ends, people will be fired up and keen to do more next year. 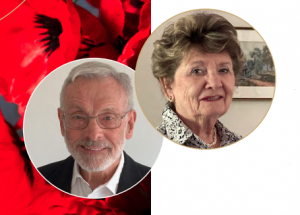